Reclaiming the spirit of the law

A feverish look shines from the eyes of a young woman as three men in cloaks  of fine linen march her into the village square. Her skin is the color of olives; her long, dark hair is not plaited.  She wears a plain robe woven from wool and on her feet sandals of leather. Derisive catcalls and cries of “Adulterer!” “Harlot!” greet her from the gauntlet through which she is pushed and prodded. The white disk of the noonday sun allows no  forgiving shadows.

The local Inquisitors are using the young  woman as bait, setting a trap to ensnare an itinerant rabbi from far-off Nazareth, who teaches in parables and dares to question their authority. They confront him as he stands near the well, observing the trial about to begin. The laws of Moses command that adulterers be stoned, they taunt him, what say you about this one?

Jesus knows his foes well, these thin-lipped dogmatists of the letter of the law. In all their studies of the prophets, they have forgotten nothing and learned nothing. He has foiled their stratagems before, and he regards them with an expressionless scorn. The crowd impatiently awaits his reply.  Stones in hand, they have their work to do. Jesus does not speak immediately, but instead writes on the ground as he composes an answer to reclaim the spirit of the law. Rising to his feet, he looks over the crowd and says in a voice that carries to the far side of the square:

“He that is without sin among you, let him cast a stone at her.”

Jesus fixes a steady gaze on the Inquisitors, as their smirk of arrogance fades. Those among the crowd who a minute ago were crying for the woman’s blood now have silent tongues. The faintest of breezes rustles the leaves on the sycamore trees. Somewhere in the distance, a child cries. The  Pharisees are reduced to shuffling away in silence; not a word of response have they spoken. They are convicted by their own consciences. The crowd disperses, pondering Jesus’ words. “What does it mean?” a voice asks. No one has a ready answer.

The young woman alone remains with Jesus. She stands silently, in a daze. The cold sweat trickles down her back. I do not condemn you, Jesus says, and she feels the strength returning to her legs. She begins to weep, as relief flows  through her like a river. But Jesus is not one for situational ethics.    He places a hand on her shoulder and says,  “Go, and sin no more.” Before leaving, the woman gets a cool cup of water from the well and offers it to Jesus. He smiles, but with sadness in his eyes, and thanks her.

For one sun bleached afternoon, the law tempered with mercy is redeemed from the ones with bloodless lips who would see it etched into stone. Jesus has spared a woman who broke one of Moses’ laws; in so doing, he has invited the wrath of the patriarchs.  Jesus knows that soon they will have their day. 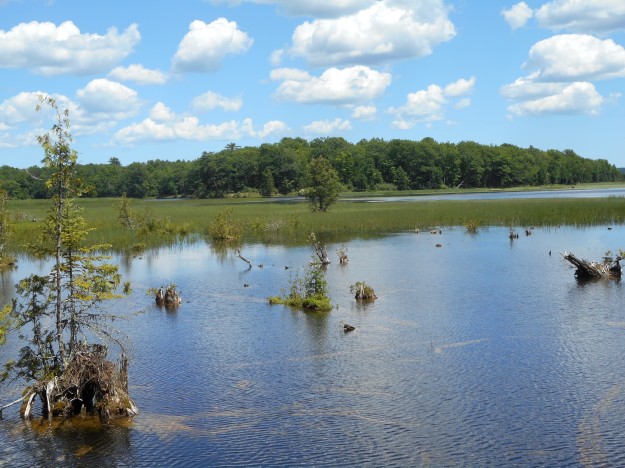 I found this place secluded, where the shallows stretch almost from shore to shore, and the reeds emerge from their aquatic hiding place to wave in the warm sunlight.  I’ve been friends with this river since I was a boy, but as the coasting  clouds seemed to pause  for a rest over the water,  the feeling that I was seeing it, and experiencing it, for the first time touched my thoughts like a gentle breeze.

© Tom Schultz, 2017. Unauthorized use and/or duplication of this material without express consent from this blog’s author is prohibited. You’re welcome to use excerpts and links, as long as credit is given to Tom Schultz and Spiritinpolitics with direction to the original content.